We have a collection of wonderful memories … 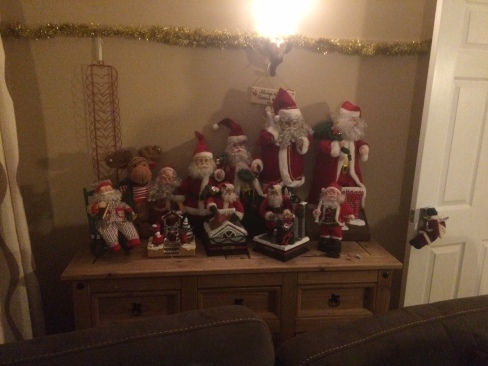 We collect a different Santa each year.

Some are small.  Others large.  Some do things.  Others’s don’t.  Some that used to do things no longer do.  Some now have heads not quite joined.  Others have arms not now quite joined.  Some have come to a gruesome end when they met “Dog” a few years ago.  And those that survive are brought out each year … and are becoming ever more fragile.

Yet our memories never have.  Our memories grow stronger.  Maybe not in the detail, but in the shared love and warmth of many years rolled into one “merged memory”.

We “Christmas decorated” the house over the weekend.

This morning our young grandson, Xander, spent a long time examining each detail.  It took quite a while (my wife is called “Mrs Christmas” by our children).

Xander doesn’t remember all of this happening last year.  He is only two years (and a few months) right now.  But he is already developing a “merged memory” of so much – of all the fun – of the love and warmth – that connects him to us – and us to all of him and his world.

And as we moved around the house … as we touched the sparkly stuff … picked up and put down the baubles … switched on and off the moving stuff … looked up and down … over there and over here … Xander declared with love and ever more certainty:

And that “merged memory” of love and warmth and connection is growing.  So I wonder (as I reflect on the debate and division around the bible and faith and religion and proof and evidence and right and wrong and all that “bad stuff”) …

4 thoughts on “You have good stuff”