From Job in Christianity 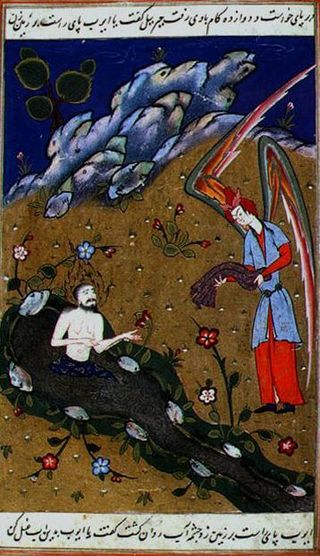 An imagining of Job from an illuminated manuscript version of Stories of the Prophets Public Domain. Date d.427 A.H.

In the Qur’an, Job (Arabic: أيّوب‎, translit. Ayyūb) is considered a prophet in Islam.[20] The narrative frame of Job’s story in Islam is similar to the Hebrew Bible story but, in Islam, the emphasis is paid to Job remaining steadfast to God and there is no record of his bitterness or defiance,[21] or mention of lengthy discussions with friends. Some Muslimcommentators also spoke of Job as being the ancestor of the Romans.[22] Muslim literature also comments on Job’s time and place of prophecy, saying that he came after Joseph in the prophetic series and that he preached to his own people rather than being sent to a specified community. Tradition further recounts that Job will be the leader of the group of “those who patiently endured” in Heaven.[23] Philip K. Hitti asserted that the subject was an Arab and the setting was Northern Arabia.[24]

The Qur’an mentions Job’s narrative in a concise manner. Similar to the Hebrew Bible narrative, Islamic tradition mentions that Satan heard the angels of God speak of Job as being the most faithful man of his generation.[25] Job, being a chosen prophet of God, would remain committed in daily prayer and would frequently call to God, thanking God for blessing him with abundant wealth and a large family. But Satan planned to turn the God-fearing Job away from God and wanted Job to fall into disbelief and corruption.[25] Therefore, God allowed Satan to afflict Job with distress and intense illness and suffering,[25] as God knew that Job would never turn away from his Lord.

The Qur’an describes Job as a righteous servant of Allah (God), who was afflicted by suffering for a lengthy period of time. However, it clearly states that Job never lost faith in Godand forever called to God in prayer, asking him to remove his affliction:

And Job, when he cried unto his Lord, (saying): Lo! Adversity afflicteth me, and Thou art Most Merciful of all who show mercy.

More
To I know that my Redeemer lives

1 thought on “Job in Islam”