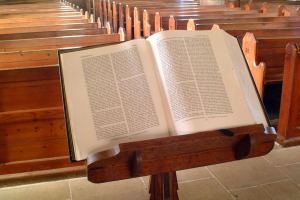 “to set a value upon … to assess a penalty … to allege as a crimination … Hence: to reprove … chide … censure … rebuke … reprimand … “

All that for just one word.  The word “rebuke”.

What caught my attention was the word itself – and then the preface: the setting a value and assessing. The word “rebuke” was a consequence of that.

“After leaving the synagogue he entered Simon’s house. Now Simon’s mother-in-law was suffering from a high fever, and they asked him about her. Then he stood over her and rebuked the fever, and it left her. Immediately she got up and began to serve them. As the sun was setting, all those who had any who were sick with various kinds of diseases brought them to him; and he laid his hands on each of them and cured them. Demons also came out of many, shouting, ‘You are the Son of God!’ But he rebuked them and would not allow them to speak, because they knew that he was the Messiah. At daybreak he departed and went into a deserted place. And the crowds were looking for him; and when they reached him, they wanted to prevent him from leaving them. But he said to them, ‘I must proclaim the good news of the kingdom of God to the other cities also; for I was sent for this purpose.’ So he continued proclaiming the message in the synagogues of Judea.” Luke 4:38-44

Years ago in an office a far far away, one of my jobs was to photocopy by hand a big pile of A5 skinny-thin invoices every week.  A monotonous job.  A boring job.  A job I wished I didn’t have.  Until one day I “rebuked” my negative thinking.  And replaced it with a competition mindset: could I work fast enough putting-in and taking-out the fiddly papers in time to keep “the photocopier noise” going?

Because a photocopier “sounds busy” whilst actually copying – but “rests quietly” when not.  And the gap between the two is small.

So each week I “assessed” my progress in shoveling bits of paper in and out against the “busy noise” and keeping it constant – and for how many sheets and whether I was getting faster.  The consequence was that I enjoyed this part of my job and actually looked forwards to it!

The “person of a headache” acted to make my brain hurt.  I set a value against what I needed to get done.  I assessed my response and personalised it.  And the consequence was I felt a damn sight better for taking control of something I thought controlled me.  I created relationships between me and something inanimate (bits of paper and a photocopier) AND between me and something organic but insentient (“fevers and headaches”).

My choice.  My action.  My value setting.  My chosen response.  My consequence … ?

Quality of life shot-up in that moment and moments thereafter.

And my thought is this …

Have a great day – it’s always your choice!!