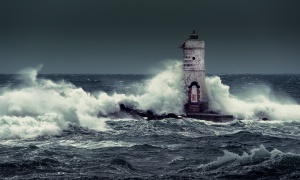 >>> As the sound of things blowing over was missing last night it was only a reminder of the power of “stuff” we call “nature”.

I know a little about pressure gradients and isobars.  School knowledge.  I know the isobars don’t need to be too closely packed for stuff to get blown around.  TV weather reporting stuff.  That certain wind speeds do stuff to stuff and that above a certain number bad stuff happens to stuff.  We all pick that stuff up just by being alive and living with this “stuff”.

Might not know much about much – but I know “stuff”.  Jack of all stuff but master of none kinda guy.  That’s me.

Verse of the Day: “Let those who love the Lord hate evil, for he guards the lives of his faithful ones and delivers them from the hand of the wicked.” Psalm 97:10

Someone who knows about religion-stuff picks these verses of the day.

To prove I am right and you are wrong.

And that means debate has a winner and a loser.  Except we all define winning and losing differently.

Some say that presenting a proposition in a calm and measured way even when attacked with emotive and senseless distractions is “winning”.  Others say that rubbing your opponent’s nose in their own lack of knowledge, evidence AND humanity is winning.  Others just like raising the ire of another and will argue the opposite of  everything in order to get a rise out of their “opponent”.  Winning for them is seeing another get riled no matter where “truth” lies.

So winning is like “stuff” – different for different people AND different at different times in our lives.  Just like being right – just like “truth”- we all change and truth changes as we change.

Except that seems to send us into a spin!   We get “blown about” by “change”.  And the sound of those differences can be really damaging.  Like this one …

Even the very word offends some.  Those who “don’t believe” attack the imposition of this “religious mumbo—jumbo” on society.  Whilst those “who believe” mourn the loss of the “truth” of Christmas in this secular world.  And on The Day both enjoy a great big turkey with all the trimmings (or the duck option or vegan option or minimalist option or serving others option … we all have an infinite variety of “options” we all enjoy as our “truth”).

And therein, for me, lies the senselessness of all of this “being right”.  Truth changes – being right changes – even winning changes.

So why are we compelled to tell each other that “My way of enjoying all the trimmings is right and yours is wrong”?  That, for me, is utter madness.  Isn’t it simply an opportunity for all of us to love AND be loved with less conditions than we usually apply?  And isn’t that a “truth” worth celebrating?

“Let those who love hate being right, for love guards against the bullshit in all that crap.”

The other is that I change and (my) truth changes with me.

1 thought on “Reading the bible differently”