Once upon a time a committee was deadlocked.  One member had presented with both passion and conviction.  An idea of insight.  A proposal of change.  A change that might be life-changing for those currently without hope.  But the devil is in the detail.  The detail of funding and logistics.  The necessary due-diligence.  The risk assessment of the risk averse.  This was, after all, charitable donations and the credibility and legitimacy of its use.  Deadlock was because half the committee were convinced future funding would be found “by the grace of God” – the other half were not convinced.  A common scenario.  A regular occurrence.

Yet this one member stood for a final time and made an impassioned plea.  All the necessary funding and logistics and people were in place for phase one.  As for phase two and beyond … this was what walking in faith was all about surely.  That the half who were not convinced were not convinced ONLY of the absence of finances and “stuff” beyond phase one.  Because the whole committee WAS convinced IF funding beyond phase one  had been in place.  Maybe this was not a test of practical financial planning – maybe this was an opportunity to walk in faith together.

And as the member sat down another stood up.  A nay-sayer now a yea-sayer.  Deadlock no longer.  By a majority of just one vote the proposal was carried.  The mood was sombre. Those in favour fully aware of the almost half not yet convinced.  And, as the decision-making turned into implementation, there were indeed arguments and fallings-out and fallings-in.  Old allegiances became new allegiances.  But as phase one became a reality – a living breathing reality – even the nay-sayers became yea-sayers.  Walking in faith was fun!  Walking in faith drew all to this bright new banner.  New life was breathed into cynical bones.  It was a brief honeymoon period they called it afterwards.  A lesson in NOT walking in faith but being swayed by passion they would conclude.  Another reason for the necessity of level-headed financial restraint by committee through due-diligence the nay-sayers were soon saying again.

Because the “stuff” necessary beyond phase one never came to fruition.

There was no miracle of funding.  There was no faith fuelled finances to keep this wonderful hope-giving movement moving.  It all ground to a halt.  Buried in recrimination and the resumption of old allegiances.  It was deemed more than just a failure – it was deemed detrimental to change.  Once burned, twice shy and all that.  The nay-sayers once again carried the day – and the vote – and the mood for less and less change. 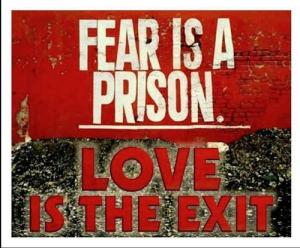 No guarantees.  No seeing over the horizon let alone around the next bend.  Living life as it should be lived.  Walking life with hope, kindness and love.  Being changed enough to have to change more and more.  Change that comes with uncertainty.  And uncertainty breeds fear.  Fear of failure.  Fear of being seen to be wrong.  Fear of all the stuff that fear demands we sacrifice to fear.  Except we never call it that.  And because we call it prudent financial husbandry we can’t then call it “fear” (and definitely can’t call it “sin” either).  So we call it a good thing instead.  Because it is.

I call it fear.  Now.  Because that “walking in faith” opened my eyes.  I saw hope created and kindness and energy and … “light”.  And that light may have burned bright for only a short time – but in me it burned brighter and stronger – even as it was extinguished in those around me.

And THAT gave me the courage to offer a part of MY business.  And that giving a part of me was my walk of faith.  A walk of giving something for nothing – other than the promise of hope.  Hope that I have seen fire relationship … that fires community … that fires love … releases the power of love … one hundredfold … and still counting …

Fear demands so much.

Walking in faith demands so little.

Why do we confuse the two?