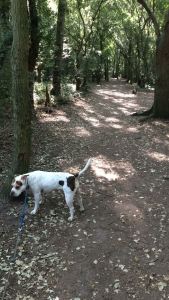 The sound of our dog slowly climbing the stairs.  Each one a slow and laborious obstacle.  Each “ker … runk” now with pause in the middle.  The stairs now a struggle.

Why is it so important – this climbing the stairs?

All she does when she reaches the top is to lie on the small half-landing – an eye on the front door – an eye on my office one-more-step-and-a-landing-further-up.  Isn’t that a complete waste of time, energy – not to mention more than a little unnecessary pain?

And then I remember our own dad in the last month or two of his life.  A scary hesitant descending of those outside iron steps.  Me in front (just in case) – him with a hand on my shoulder and the other on the rail.  All so that he could have a slow walk around the park, his arm tightly wedged in mine.  My surprise when I realised he would often close his eyes as he walked.  Maybe in pain.  Maybe deep in memories.  Maybe just deep in “Ahhhh that is good!”  Maybe all of that.  And then the slow climb back up those iron steps.  Me behind (just in case) and dad with that laboured “ker .. unking” in front.  It was worth it for him and I guess our dog’s laboured “ker … unking” is worth it for her.

Dad decided he didn’t want to be prodded and poked any longer.  Wanted to be able to enjoy what was left.  And what was left didn’t come pain free, didn’t come problem free, wasn’t filled with happy days every day.  But his time left was his time.  Lived in his way at his pace and including what he wanted to be included.

Looking back he lived in the moment.

All without any angst or guilt at all.

Our dog is getting to that stage.  We could spend £k’s on her treatment.  We could make her a bionic dog.  We could bankrupt ourselves financially and emotionally in chasing her eternal health.

But her slowing down is an age thing.  Her slowing down is a her thing.  And – like most of us – she is not keen on being prodded in those places that hurt to begin with.  Dislikes having the “medical stuff” in the way of her living.

So she might live a few years less.  She might live a little longer if we kept her from “ker … unking” up the stairs.  Kept her downstairs with gates that shrink her world  “for her own good” (that is mainly for ours).  Keeps her with us a year or two longer.  Keeps us from having to say goodbye and feeling the loss.  But that’s us living in the future not the present.

That is about our plans.

Us free of pain and “ker … unking” ...  who leave the house whenever we want … who have jobs and things to do – people to see – places to be …  Our world is as big as we want it to be.  Whereas hers is as big as the stairs allow it to be.

And taking the stairs away shrinks her world physically, mentally and emotionally.  We decide the size of her world – us whose world is so much bigger already.

I think we are all watching each other die every day.

It’s just we prefer to call it “living”.  I think we’re all scared of death no matter our belief and conviction.

We are “living specialists”.  We are good at getting through the tough times.  Good at finding hope where others see none.  Good at looking out and being recharged with a climb to the stop of the stairs – a walk in the park with our eyes shut.  We rarely want to purposely end our own life.  And when we do it is for as many myriad reasons that are as unfathomable as those for staying alive.

“Do not judge, or you too will be judged. For in the same way you judge others, you will be judged, and with the measure you use, it will be measured to you.”  Matthew 7:1-2

As I watch myself live I find “this moment” the very best place to be.