We like to see Jesus in others.  That smelly drunk loud and aggressive homeless guy … maybe not so much.  But the quiet gentle well-behaved almost smelly homeless gentleman … that could be Jesus.

Perhaps not the “too much” camp colourful gay guy … perhaps not the dangerous weirdo with an assault rifle and a grudge … and thinking about it – perhaps not a whole bunch more of other males (never females – Jesus was a man) … but the odd ones on the edge of society who don’t cause a fuss … who would fit-in if they were allowed … Jesus could be any one of those. 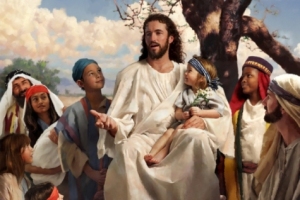 Like the ones in church.  Well dressed, well-behaved, from good homes and with good parents like us.  We like to see “Jesus jnr” in well-behaved young children.  Boys – obviously.

“Take care that you do not despise.”

I don’t know about you, but that is a harsh word.  Deffo in the “bad sin” category.  Can’t really brush off “despising” without being a Christian in need of instant remorse and grace (freely given).  The odd white lie is okay – but “despising” isn’t.

“feel contempt or a deep repugnance for”

Like never seeing Jesus in an aggressive drunk really smelly homeless man … ?  Not seeing Jesus in any female homeless ladies at all (we have the Virgin Mary for the ladies) … ?  Nor seeing Jesus is any of those “gay” guys AND girls … ?  Nor in anyone who makes me really uncomfortable … ?  Like “look the other way” uncomfortable … “cross the road” really uncomfortable.  And anyway – that isn’t “despising” those people – even Jesus had standards – that’s why there is grace freely given – to forgive those who are really bad sinners – those who “despise” others.  Like those who despise Christians.  Even Jesus knew that.

Today the intro to the verses tell me it is “Guardian Angels Day”.  And we all know that we have our own personal guardian angel.  It’s the same sort of set-up as the Father Christmas operation … except the elves are angels … and they work for God not Santa.  But the result is the same – I have good things with my name on them … All I have to do is believe.

If I don’t see Jesus in you, it’s not despising you – it’s having standards and expectations and following the rules and being a good Christian.  Because sin is everywhere.  False teachers too.  That’s what the bible tells me.   And Jesus wants me to do what’s in the bible.  And anyway …  if you look into the original Greek or Hebrew or whatever language they are all spoke … I bet that word wasn’t even used … not like we mean it today … God probably never said despise at all.  Which means all this is probably not even a bad sin at all.

I love reading the bible!